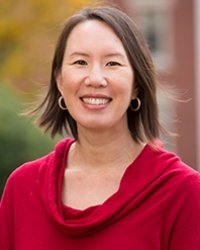 Ann K. Shinn, MD, MPH, is the director of clinical research in the Schizophrenia and Bipolar Disorder Research Program, and an assistant professor of psychiatry at Harvard Medical School. From 2013-2017, she was the co-medical director of McLean OnTrack, an intensive outpatient program specializing in the treatment of first episode psychosis. Her current research focus is in understanding the neurobiology of symptom dimensions in psychosis. She is the principal investigator of a federally funded research grant (K23 award) to investigate how auditory, speech, and language regions are connected in the brains of individuals with psychotic disorders who hear voices.

Dr. Shinn remains dedicated to improving the lives of individuals with psychosis, especially in early stages of illness. She teaches psychiatry residents about early psychosis. She also serves as an advisor to medical students in the Harvard-MIT Health Science and Technology MD Program. Dr. Shinn served as the McLean Hospital site co-director of the Harvard Medical School Psychopathology and Introduction to Clinical Psychiatry course from 2011-2014.

In related work, Dr. Shinn and her colleagues provided evidence in support of the DSM-5 Psychotic Disorders Work Group’s decision to eliminate the special treatment of first-rank auditory hallucinations (e.g., voices conversing or giving a running commentary) and bizarre delusions in the diagnostic criteria for schizophrenia. In this work, Dr. Shinn and collaborators showed that few patients receive a diagnosis of schizophrenia based on first-rank auditory hallucinations alone.

Dr. Shinn is also an investigator on a federally funded project (led by principal investigators Margaret Niznikiewicz, PhD, and Susan Whitfield-Gabrieli, PhD) to investigate the effect of real-time fMRI neurofeedback on engagement and modulation of the superior temporal gyrus, a region of the brain that plays a central role in auditory and language processing in schizophrenia patients with auditory hallucinations.

Dr. Shinn’s work also concerns investigations into abnormalities of the cerebellum in psychotic disorders. There is growing evidence that the cerebellum, which is reciprocally connected to higher-level association areas such as the prefrontal cortex, is involved in both non-motor as well as motor functions. Unlike most psychiatric neuroimaging studies that treat the cerebellum as a single homogeneous structure, she systematically investigated the topographic representations of cerebro-cerebellar resting state networks within the cerebellum in schizophrenia and found selective alterations in specific networks. Dr. Shinn and her collaborators conducted a similar study of cerebro-cerebellar functional connectivity also in individuals with bipolar disorder with psychotic features.

Currently, Dr. Shinn is conducting a pilot study in collaboration with transcranial magnetic stimulation (TMS) experts at Massachusetts General Hospital to investigate the effect of cerebellar stimulation on psychotic symptoms, including auditory hallucinations, in individuals with schizophrenia and bipolar disorder.

Procrastinators May Delay All the Way to Worse Health